On 7th March 2019, a group of Togolese religious from different congregations met at Hekima College, a Jesuit theological university in Nairobi, Kenya. The aim of such a meeting is to allow a few number of Togolese religious to be acquainted to each other and share their journey of faith and vocation. Were present for the meeting some Jesuits scholastics, two Comboni Missionaries, two Salesians of Don Bosco and one of Society of African Mission (SMA).

After the lunch in the big community of Hekima College, the gathering took place in one of the small communities of the house. A good and joyful atmosphere fostered the get-together during which the brothers introduced themselves to each other. As they shared their respective journey of formation, they also acknowledged the goodness of encountering others in the same way. The sharing helps them to understand that this journey of faith is not only personal but also communal. Through everyone’s vocation, God is manifesting his love for all the humanity. We need to encounter others and discover the presence of the Lord in their life ‘story.

Furthermore, since three of the brothers had been living in Kenya for more than two years, they also shared about their apostolate and the work of their respective congregations all over the country. In addition to that, room has been given to explain shortly some specificities inherent to each congregation. The gathering took place in a climate of joy, fraternity and openness in the sense that two Jesuits from Cameroon and Côte d’Ivoire were also invited. It made the gathering more fruitful. It was a grace for these fraternal exchanges and all blessed the Lord for our vocation and encouraged each other in the following of Christ. 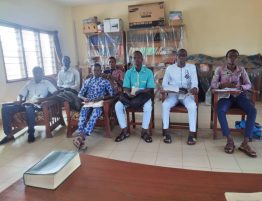